Religious History of the South: a very late review 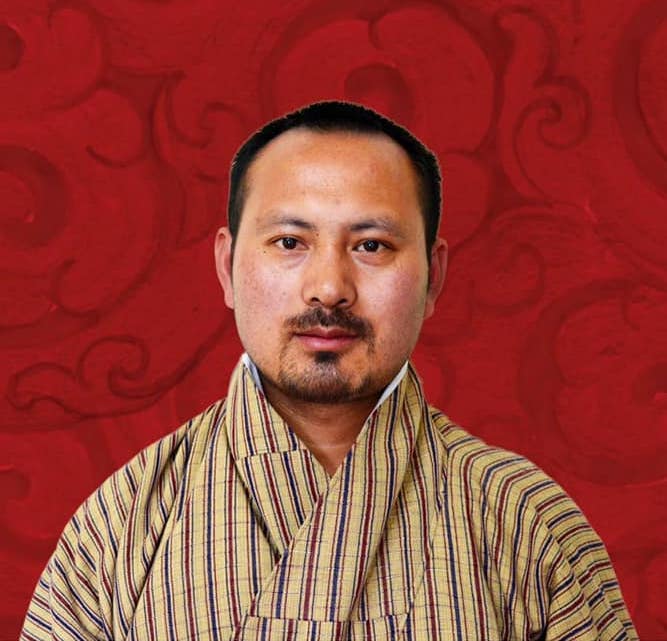 This article first appeared in The Druk Journal

Sometime in the 10th month of Iron Hog year, 1731, Tenzin Chogyal, the prelate who later became the 10th Chief Abbot of Bhutan, offered a cup of fine tea before the physical remains of Zhabdrung Ngawang Namgyal, the founder of Bhutan. He also carried out an elaborate offering to the tutelary deities of Bhutan in the sacred chamber of the deities in Punakha, Bhutan’s first capital. These acts, imbued with the spirit of national power and symbolism, marked the formal launch of Tenzin Chogyal’s project to write the first national history of Bhutan.

The result is Lho’i chos byung bstan pa rin po che’i ’phro mthud ’jam mgon smon mtha’ ’phreng ba, Bhutan’s first national chronicle. The book was completed almost three decades later on the birth anniversary of the Buddha in 1759 at Zabdon Lhuntse, the temple establishment popularly known today as Wangditse. It was promptly published using xylographic prints prepared by five carvers and perhaps also widely distributed. The author, by then, was at the peak of his career holding the highest religious position of Je Khenpo or Chief Abbot in the country. He had long been known as a great scholar or panchen, had penned many biographical writings and was indisputably one of the three most illustrious living figures in the whole country.

Without any contemporary reports or reviews, it is almost impossible to tell how Tenzin Chogyal’s book was received by his milieu. Yet, the value of Tenzin Chogyal’s work can be properly appreciated by the influence it had on the Bhutanese historical thought and writings in the centuries to come. Tenzin Chogyal’s account of how Buddhism spread to the valleys of Bhutan and the formation of the Bhutanese nation state under the Drukpa rule was without any doubt a groundbreaking work. It was the first formulation of Bhutan’s history at a national scale bringing together the various stories of religious, political, social, and cultural transformations. To the Drukpa state of Bhutan, which Zhabdrung and his coterie had created about a century earlier, Tenzin Chogyal’s book gave the much-needed historical consciousness and literary voice to reinforce its unity and sovereignty. Understandably, the book set the tenor for subsequent historical narratives and remained unrivalled as documented history until the second half of the 20th century. The monk author, however, did not make any claims of producing a pioneering tour de force. Instead, he considered it a mere continuation of the history of Buddhism written by Pema Karpo, the pre-eminent hierarch of the Drukpa school. Pema Karpo told in rich poetic language the story of how Buddhist doctrine in general and the teachings associated with the Drukpa school spread first in India and later in Tibet. Tenzin Chogyal saw his religious account of Bhutan as a sequel to Pema Karpo’s history. He picked up from where Pema Karpo left in continuing the story of dissemination of Buddhism by recounting how it spread to the Bhutanese valleys south of Tibet. This modest approach with focus on local developments comes out very clearly in the layout of the book.

Tenzin Chogyal dedicates the first part of the book to the geography and early historical developments in the areas, which make up the cultural and political heartland of Bhutan. Through this, he sets the backdrop for the historic arrival of Zhabdrung Ngawang Namgyal in Bhutan and the emergence of Bhutan as Drukpa state in the middle of the 17th century. Tenzin Chogyal clearly sets out to update Pema Karpo’s account of Buddhism by informing his readers of the diffusion of the Drukpa tradition in Bhutan. Yet, we can clearly see an underlying nationalistic tendency in Tenzin Chogyal to extricate Bhutan from the hegemonic Tibetan world. In a very striking and bold theory, he ventures to make a cosmological argument that the land which constitutes Bhutan existed long before the sea which covered Central Tibet was drained out to allow human population in that country. Like many historians after him, Tenzin Chogyal argued for the antiquity of the Bhutanese mountains and valleys by identifying them with the solitudes visited by Indian saints of yore.

The main body of the book, as the extended title suggests, dwells on the life and works of Zhabdrung Ngawang Namgyal from his august birth and upbringing, conflict with the Tibetan ruler, journey into exile, establishment of a base in Bhutan, military clashes with Tibetan invaders and the foundation of a theocratic system of governance to Zhabdrung’s death in 1651, which was concealed through the hoax of an extended retreat. He repeatedly underscores the point that Zhabdrung was Bhutan’s ruler of destiny and the fate of the country is intricately tied to the beneficence of Zhabdrung as a scion of the holy Gya family of Ralung and the incarnation of Buddha Avalokiteśvara. The book also documents the works of the early monk rulers and monastic prelates in order to consolidate the power of the new Drukpa dominion. Chief among them are the three lines: the Gyaltshab hierarchs who occupied the golden throne of Zhabdrung, the Desi rulers who held the reins of temporal governance and the Je Khenpos who were at the helm of the monastic community. Interspersed with the biographies of the personalities holding these three positions, the author lists the religious and cultural enterprises undertaken by them and their efforts to safeguard Bhutan’s newfound sovereignty, the rule of law and Zhabdrung’s dual system of spiritual and temporal governance. The history is largely a hagiographic account of the righteous deeds of Bhutan’s early leaders and only sparsely touches on the numerous political imbroglios and conflicts, which marred the new state. The few allusions he makes to the negative episodes of Bhutan’s history have to be largely confirmed or understood in detail by reading other sources from the period. As a monk and person of high public stature, our author is understandably very diplomatic and also generally occupied with positive religious narratives. Thus, his history is far from being an uninhibited critical and objective account and analysis of the human intrigues and rivalries. Even where the author deals with cases of worldly pursuit of power, he uses euphemistic language and religious apologetics to save the embarrassment. Almost the only case where he is found to be critical is when he passes a sarcastic remark on the rule of the 7th Desi Umze Paljor. “He did neither service nor disservice to the system,” wrote Tenzin Chogyal. “But he enjoyed his entitlements almost three long years. His rule was a joke” (f. 97).

The book also discusses the introduction of artistic traditions such as sculpture, fine arts and calligraphy in Bhutan and also includes a verbatim reproduction of the legal decree or bka’ khrims compiled during the reign of the 10th Desi Mipham Wangpo. As there are almost no substantive records on the origins and evolution of Bhutan’s rich cultural heritage, the chapter on cultural and artistic traditions provides us interesting and useful information. However, the information provided is so scanty that it leaves a cultural historian with a nagging thirst for more. In the same way, the legal decree gives us a clear insight into the state administrative mechanism and the existent laws of the land. It sheds light on the contemporary social problems and the measures the state had to take to curb them. For instance, the decree mentions the increasing use of the evil substance of tobacco, which contaminates the holy shrines and upsets the natural balance of the world. All commissioners, governors, ambassadors, officials and village elders are asked to penalise people who use this substance or bear the penalties themselves. Border officials are asked to stop the import of the substance right at the entry points (f.107).

The final part of Tenzin Chogyal’s history contains the origin myths and accounts of Bhutan’s leading tutelary deities. The book is unique in integrating the stories of the non-human deities in the general narrative of a national history. Yet, this is not surprising, especially when viewed from the perspective of medieval Bhutan in which Tenzin Chogyal and his contemporaries lived. The traditional Bhutanese worldview allocated the same degree of importance to the nonhuman players in history as they did to the human players. The credit for the foundation of the Drukpa state and the astounding success of repelling repeated Tibetan invasions and safeguarding the sovereignty during precarious political times is given mostly to the powerful protector deities of the Drukpa tradition. We see a striking instance of this belief after Bhutan successfully repelled the fourth Tibetan invasion and the first one sent by the Dalai Lama’s government in 1644. When the Tibetan generals were made to disarm and remove their armour before Zhabdrung, a Tibetan governor is said to have remarked: “Were it not before a lama, I cannot bear to offer my armour to the enemy”. To this, Zhabdrung bluntly added: “It is not you who offers the armour but my deity Mahakala”. The world of the protector deities was real and important in the eyes of traditional Bhutanese like Tenzin Chogyal. Thus, it is befitting that the stories of the guardian gods are told alongside the biographies of human figures. For a cultural and religious student, the assorted accounts of the deities also represent a feast of information on religious ideas and their implications for the politics of a religious nation.

Tenzin Chogyal’s history was written during the heydays of medieval Bhutan. Politically, Bhutan was enjoying the righteous and peaceful reign of Sherab Wangchuk, having overcome the last Tibetan invasion of 1730 and also regained territorial unity after the return of Paro, which was temporarily ceded to a rebel faction. There was also an unprecedented intellectual, literary and cultural fervour in the country inspired by hierarchs such as Shakya Rinchen, Tenzin Chogyal, Kuenga Gyatsho and Yonten Thaye with the staunch patronage of the exalted Desi. The time was right for Bhutan to have its own national history in order to strengthen the notion of the Drukpa state and to promote a state intelligentsia and narrative aimed at reinforcing sovereignty and independence. It is exactly to this effect that the Bhutanese today must read Tenzin Chogyal’s history of Bhutan in order to appreciate both the sacrifices made by the founding fathers and their ultimate vision and purpose of building and safeguarding a nation, which we cherish as our homeland.

About Author: Karma Phuntsho (D.Phil) is a leading scholar on Bhutan and Buddhist Studies. He is the author of several books, including The History of Bhutan. He is the founder of Shejun Agency for Bhutan’s Cultural Documentation and Research and the President of the Loden Foundation.